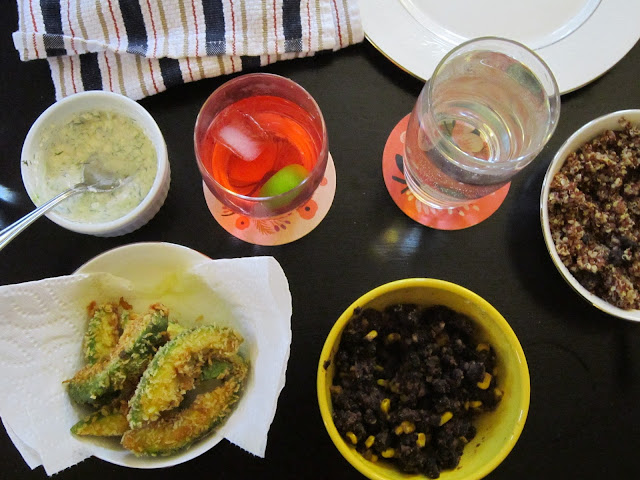 Do you ever leave posts in your drafts folder for no apparent reason? I've had one post on songs I always have stuck in my head in drafts for over a year (aren't you dying to know what they are now?! I'll just tell you: it's mostly Christmas music that I sing year round, much to Peter's delight!).

I've had this photo of fried avocado tacos saved in that folder for a while, too, which is real shame, because they are delicious and not as hard as they sound. You will like them!

I used this basic recipe, but much lazier. First, make sure you're starting with a perfectly ripe avocado - not too mushy and not too firm (though if I were swinging in one direction or the other, it would be the firm side). Slice it up into 1 inch strips, give it a dip in a scrambled egg, and then gently toss it in panko. I heated up about 1/2 inch of vegetable oil - much less than they call for in the recipe - and just flipped them around a few times to get everything nice and crispy.

That white stuff at the top was a genius addition (if I do say so myself!) - a big spoonful of plain Greek yogurt, chopped cilantro, lime juice, and crumbled blue cheese. I made blue cheese guacamole once a long time ago, so I knew it would work well with the avocado. Then add whatever other toppings you want - rice, corn, beans, etc. (I'm reading this right now, as Jess said, it makes me crave tortillas!).

Have you made these yet? I hear they're all the rage in Austin!
Posted by Julie at 2:32 PM