Soooo, I have to say, I'm a little nervous to actually show you some pictures of our house (well, it will be ours in a few weeks - we close at the end of the month!). I think this fear stems from seeing other people post "before" pictures of their homes, outlining all the things they want to change, when really, it doesn't look that bad at all. Know what I mean? THIS HOUSE LOOKS BAD.

But, as my mom says, if something is kind of ugly or really ugly, you still have to change it. And so, I give you our entry way and living room. It needs so much love and attention, you guys. 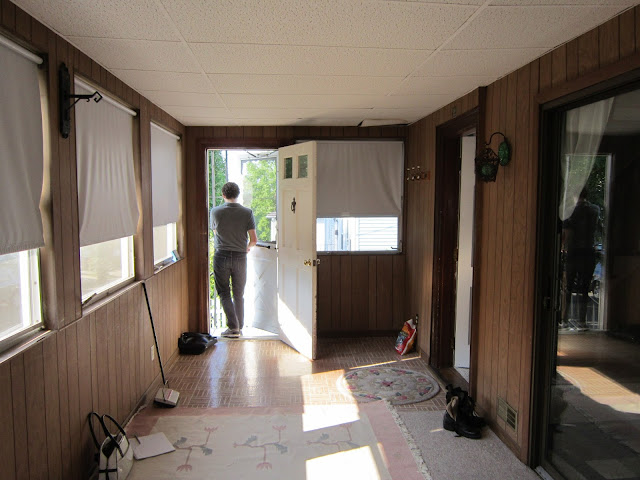 This is the first room you walk into from the front entry. Peter's so disgusted, he had to leave immediately. This was likely a front porch that they converted into an all-seasons room, and they left some very clear remnants of it's past. For instance, they kept the original front door, a glass sliding door,and their outdoor light right inside their house. OMG I KNOW. Other horrible things to note: the paneling, the linoleum/cheap carpet combo, the gross old windows, and the tile ceiling.

This space is actually something we're planning to tackle right away, which I'm sure comes as no surprise (wait until you see the rest, though, and you'll understand why we wrestled with keeping it as is to do something else first instead!).

The doors inside will go, and we'll have a beam put up to secure the structure of the house (since that used to be the end of house, it needs some special support). The crazy windows will be replaced with two sets of double windows in the front, and then the hardwood that's hiding under the living room carpet will be carried throughout here. Down the line, I would love to think about moving the entry way to front of the house (it's currently on the side), and maybe adding a closet where that window is next to the real front door. And maybe a wall? We'll see how things progress. 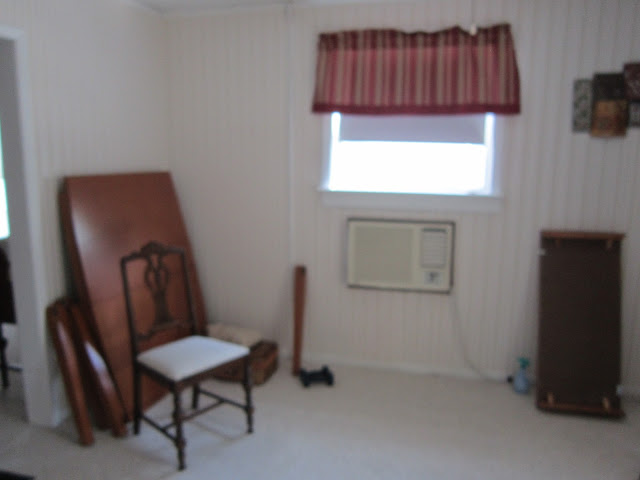 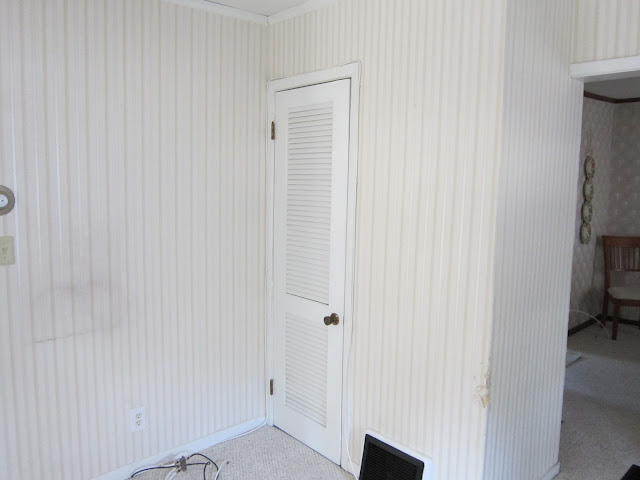 Sorry for the blurry picture, but it's probably better for your eyes :) This is the living room, which is on the other side of the sliding door. As you can see, central air! Just kidding. If you turn that AC unit on, it blows a fuse for the entire downstairs. We're having it removed, and a full window will go there instead. We're pulling up the carpet (which will hopefully reveal amazing hardwoods, knock on wood, seriously, please do), and taking off the wall paper, of course.

The bigger issue is something you can kind of see here - the wall on the other side of that door is actually covering up a fireplace. It hasn't worked for ages (maybe ever?), and square footage is at a premium, so we're going to have it removed so we can open up that wall, which goes into the dining room (and it also cuts into space in the upstairs bedrooms, which is a bigger problem)

Because of these issues (and a few others with the basement and roof, eww, worst places to have to spend reno dollars), we're going to keep our apartment for the month of August and move in about a month after closing. This will be a totally magical renovation where the things I mentioned will all be completed before we move in! (Absolutely not true, but I keep telling that to myself anyways!!!)

Any advice, guys?! I know many of you have recently taken the plunge into home ownership! Should I be doing anything besides pinning like crazy right now? I hope not, because at the moment that's my pro-bono part-time job .