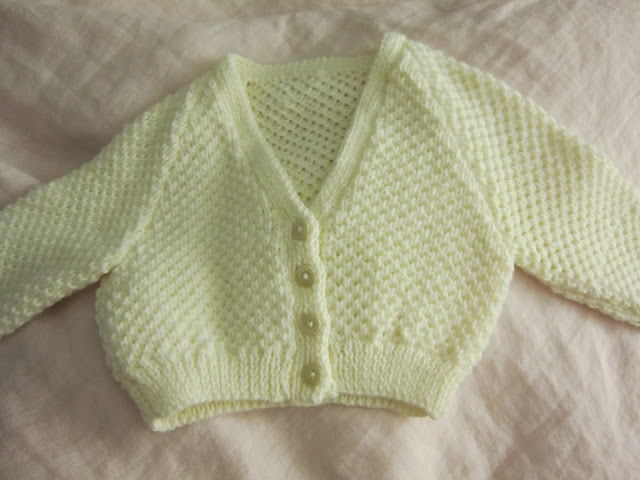 (Our one and only baby item thus far - a darling little sweater from my in-laws.)

So, yay, baby! We are absolutely over the moon. This was a long time coming (both because I'm nearly at the halfway mark with this pregnancy, and also because it took much longer than anticipated to actually get pregnant!).

I'm always curious about how people are feeling, so I'll tell you - I'm feeling really great, and completely recognize how lucky I am about that. The first few weeks were a blur of tiredness and picky eating, but for now, everything is sunshine and roses in pregnancy land.

A few other things people are sometimes interested in: we're not going to find out the baby's gender (well, until birth, of course!), we have a long list of names we're mulling over that I'll probably share later, I have a feeling that the baby's a boy, and, much to my surprise, I didn't really "know" I was pregnant until I took a test. It was also shockingly easy to forget, especially in the beginning! Not due to lack of excitement, of course, it just didn't feel real at all.

Now the baby's kicking quite a bit and I'm starting to get some visible physical evidence that I'm not just imagining this whole thing. It's feeling much more like I'm an official landlord and caretaker for this wild little wiggler.
Posted by Julie at 7:00 AM