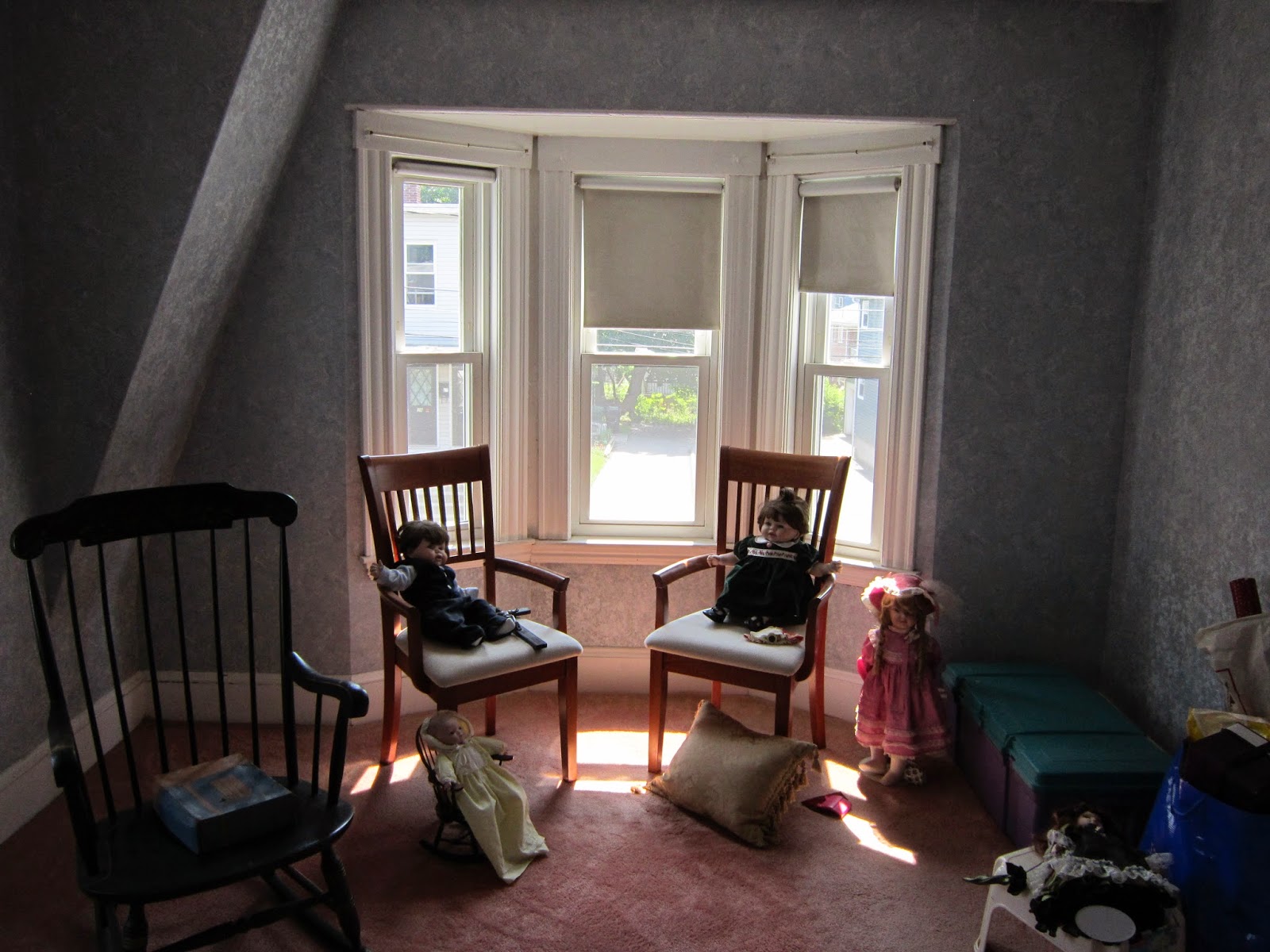 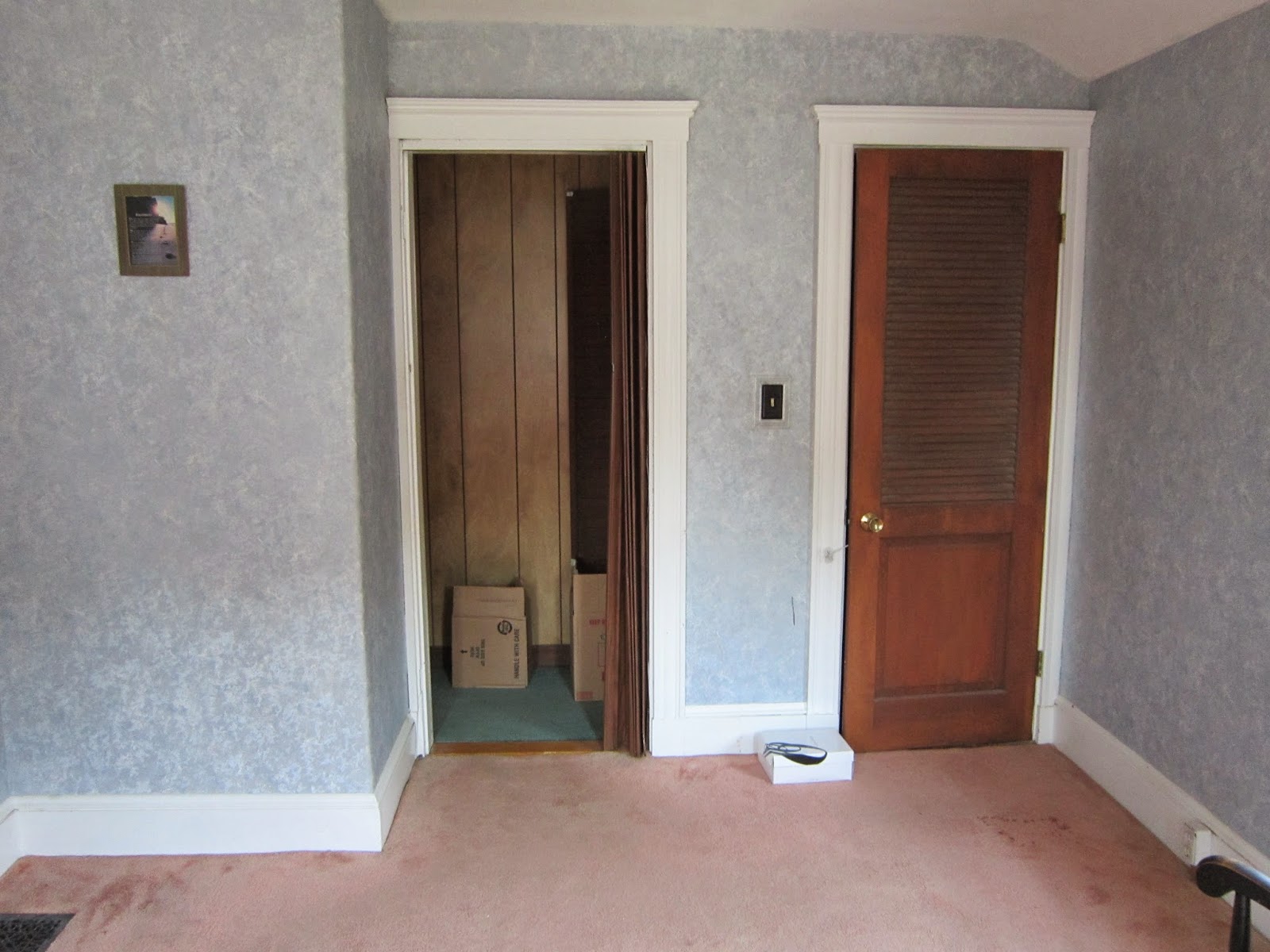 For obvious reasons, we referred to this bedroom as the "scary doll room" until it became Lizzy's cute nursery. Those dolls were haunting!

The first week we owned the house, we went over to strip the crazy blue wall paper, gave the walls a coat of white paint, and pulled up that nasty pink carpet. That made it livable for us for the almost year that we used this as our bedroom. This spring, once we finally decided to make it the nursery, it got painted a very pale grey, the closet door got painted white, and we added a real door instead of that crazy piece of folded paneling. Icky. 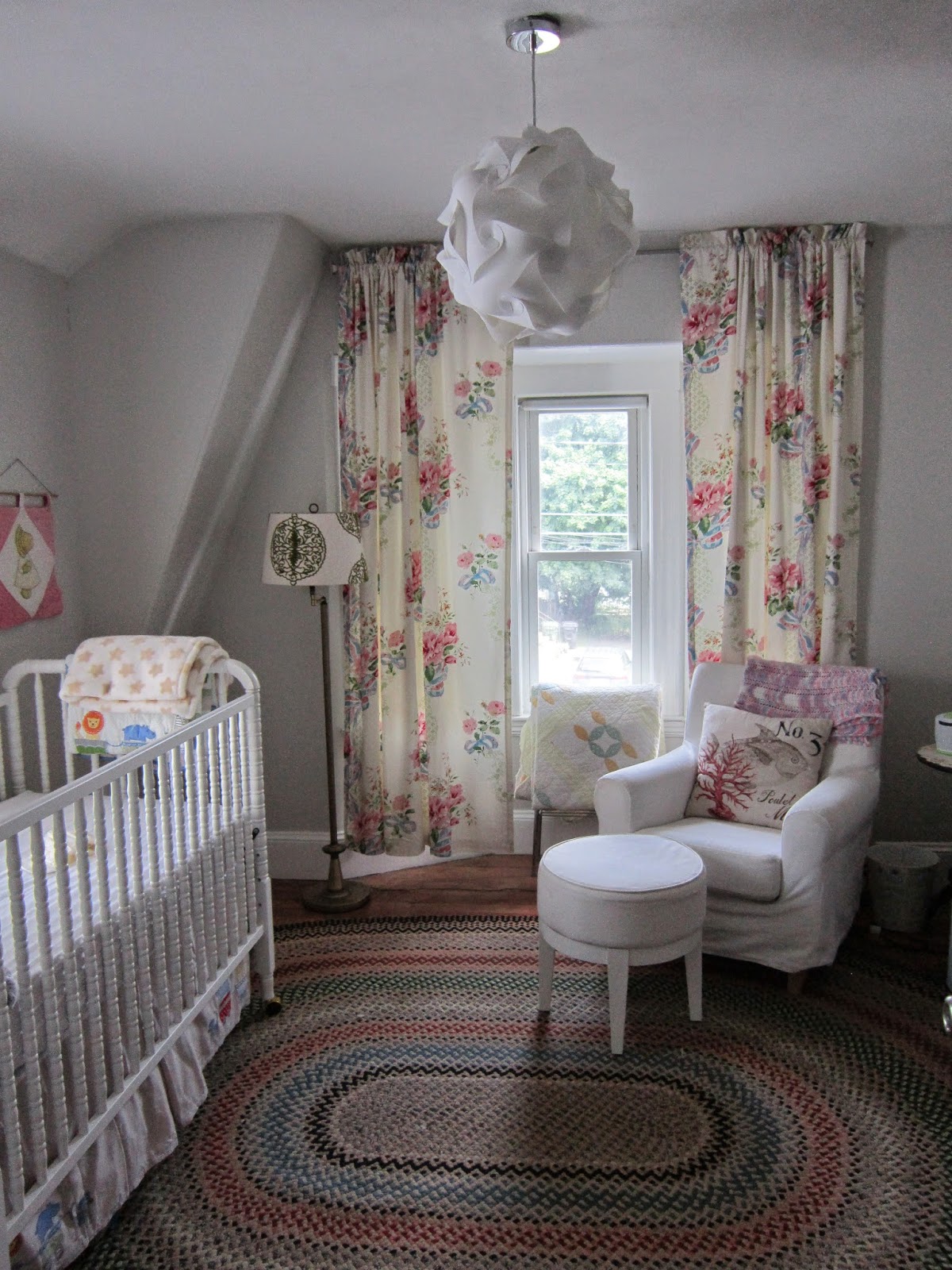 Now this is one of my favorite rooms in our house. Her crib is the DaVinci Jenny Lind from Target, but I found it on Craigslist for a song. (The woman selling it bought it a few months earlier, and claimed her daughter refused to sleep in it?!) That Ikea chair was in our living room for years, but now happily lives upstairs. The curtains were a fantastic find from the Pine Cone Hill Outlet that my mom picked up. They were made for a Nordstrom's window display and were then sent back, and I think she got them for $15 a panel! They were picked up after she was born and we knew she was a girl :) The light was another great find from my Mom - I think it was $10 at a consignment shop, and Peter installed it for me. 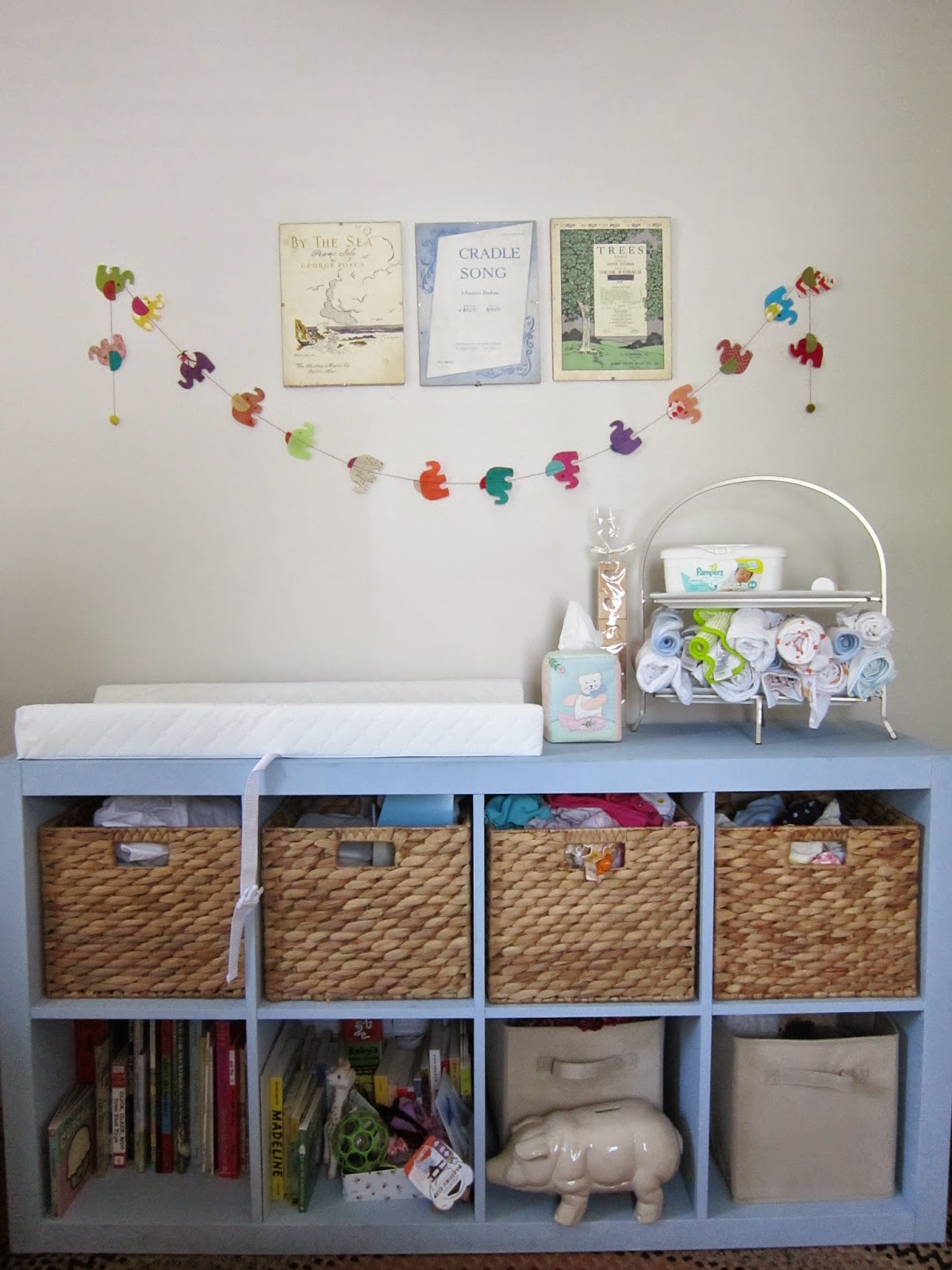 I painted our Expedit duck egg in Annie Sloan chalk paint, and we attached her changing pad to that (inspired by Young House Love and Pinterest). I put a serving piece on her table to store burp clothes and swaddle blankets, wipes, and diaper cream, which is also an idea I saw on Pinterest. It's nice having all those things so handy. 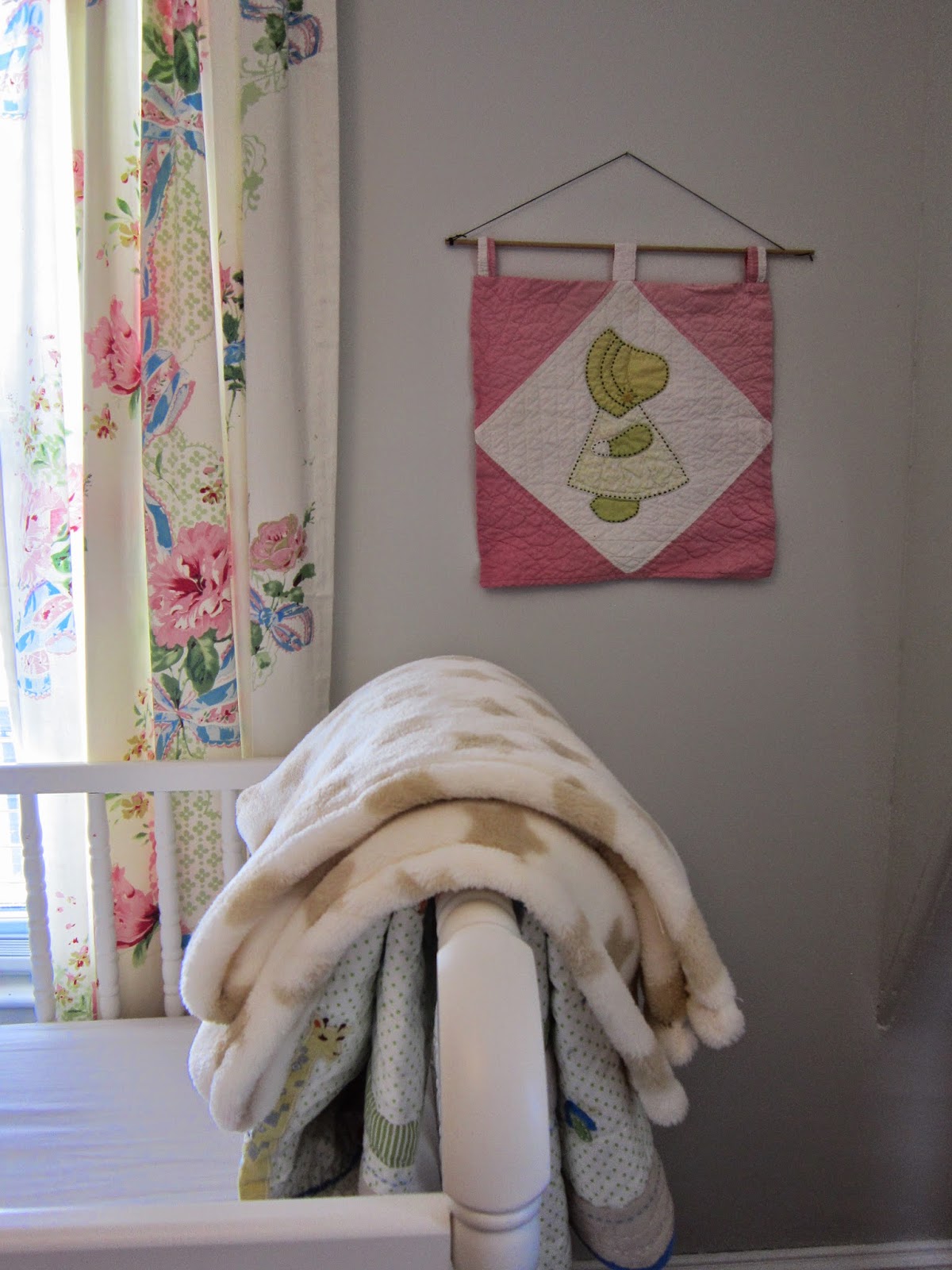 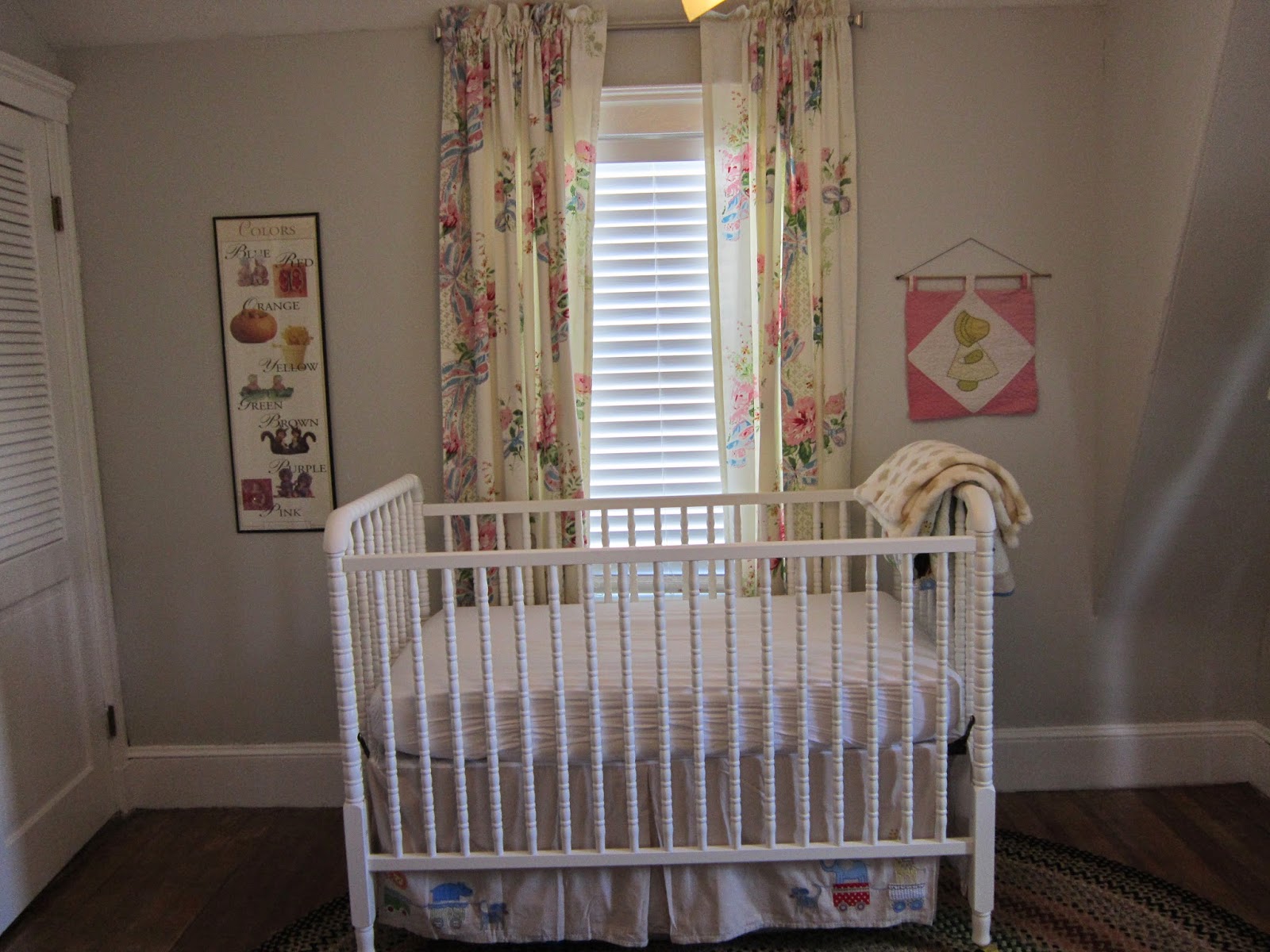 That little corner of a quilt is from Peter's grandmother. I believe it was a blanket that was made for her when she was a baby! She gave it to us years ago, and I'm so happy that it now gets to live in our sweet daughter's room.

Lizzy has officially moved out of our room and into her crib, and the transition was an easy one - easier for her than for me, I think! For me it felt like her first little step toward independence...and for her, I think it just meant sleeping in a bigger, more comfy bed. Ooh parenthood!